“"You Are There" is Shawnn's most important album to date. Rich collaborations with many of the current heavyweights of jazz. Kenny Barron and Mike Renzi, Dave Zinno, Steve Langone, Nat Reeves, Joe Farnsworth, John Allmark, Josh Bruneau and Steve Davis. You gotta hear this!"” - L.Y.

YOU ARE THERE - New Album 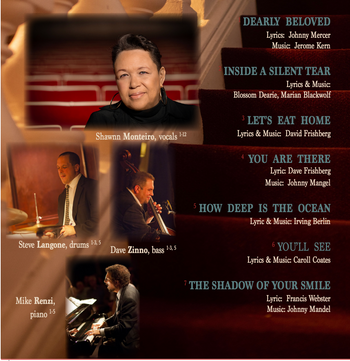 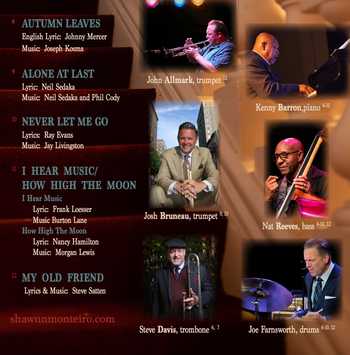 A note from Shawnn

“My Old Friend” was introduced to me
by Jimmy Cobb. It was on an album he recorded
with Gregory Hines singing vocals.
It has such a sad message and I’ve sung it at many memorials for musicians. However, it is a beautiful song melodically and I couldn’t let it go.
“Dearly Beloved” I heard performed by the great Nancy Wilson
at the Newport Jazz Festival and fell in love with it.
“Inside a Silent Tear” was written by the great Blossom Dearie...
...one of many of her songs I’d like to record.
“Let’s Eat Home” I heard on the radio performed by Rosemary Clooney
and I couldn’t get it out of my head. “You’ll See”, was written by the wonderful Carroll Coates. He wrote a couple of songs on my very first album,
Visit Me, so I couldn’t pass up the chance to record this one.
A lot of the songs are standards but timeless. I hope you enjoy what I have selected.

Jazz on the Radio WETF

Be an insider on the history of jazz through my experiences and hear the incredible musicians that I know and love. 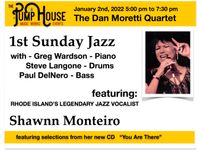 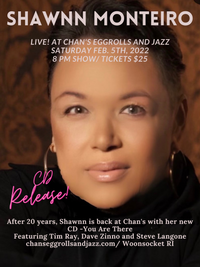 Shawnn Monteiro and her trio

After 20 years, Shawnn is back at Chan's with her new CD -You Are There Featuring Tim Ray, Dave Zinno and Steve Langone. Don't miss the show, get your tickets early! $20 in advance/ $25 at the door All ages and jazz lovers 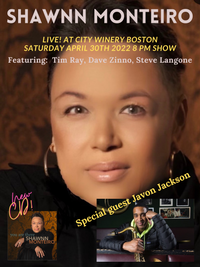 Shawnn Monteiro and her trio with special guest Javon Jackson

Shawnn Monteiro and her trio featuring special guest Javon Jackson. All ages and jazz lovers. Shawnn will be performing songs from her new CD release entitled, You Are There. Featuring well known songbook classics Autumn Leaves, How Deep Is The Ocean, The Shadow of Your Smile and more. Shawnn is a living memorial to an era that is almost fully behind us. Join us to experience the amazing jazz chanteuse extraordinaire, a veteran vocalist whose artistry is crafted in the mold of Sarah Vaughan, Carmen McRae and Nancy Wilson.

Tenor Saxophonist Javon Jackson came into international prominence touring and recording with the legendary drummer Art Blakey as a member of his band, Art Blakey and the Jazz Messengers. Symbolizing a new generation of musicians that blended tradition with neo-jazz, Jackson went on to release 16 recordings as a band leader and tour and record over 135 CDs with jazz greats including Elvin Jones, Freddie Hubbard, Charlie Haden, Betty Carter, Cedar Walton, Ron Carter, Donald Byrd, Dr. Lonnie Smith, Richard Davis, Bobby Hutcherson, Curtis Fuller, Joanne Brackeen, Stanley Turrentine, and Ben E. King. In 1992 Jackson made his recording debut with Me and Mr. Jones, featuring James Williams, Christian McBride and master drummer and NEA Jazz Master Elvin Jones. Jackson also recorded six projects for Blue Note Records featuring collaborations with Betty Carter, Dianne Reeves, Cassandra Wilson, Kenny Garrett, Jacky Terrason, John Medeski and Vernon Reid. In 2012, Jackson released two self-produced recordings, Lucky 13 and Javon Jackson and WE FOUR, Celebrating John Coltrane. For Lucky 13, Javon covers music by Stevie Wonder as well as newly composed original material. Javon Jackson and WE FOUR, Celebrating John Coltrane, is a tribute to the iconic saxophonist and composer. In 2010, Javon was commissioned by the Syracuse International Film Festival to compose a full- length score for the Alfred Hitchcock film, The Lodger, a silent movie based on the hunt for Jack the Ripper. The original score had its debut at the festival, performed live by Jackson at the film's screening in October 2010. In 2013, Javon accepted the position of Director of the Jackie McLean Institute at the University of Hartford. Jackson has a Bachelor in Music from the Berklee College of Music (Boston, MA) and a Master of Music from State University of New York College at Purchase.

Shawnn Monteiro at Feinstein's/54 Below

Shawnn Monteiro and her trio are proud to bring their show Swingin’ the Great American Songbook to Feinstein’s/54 Below! Directed and produced by Lisa Yves and Mia Moravis, Swingin’ the Great American Songbook is performed by jazz legacy Shawnn Monteiro who has played with jazz greats all over the world, including her long time accompanist and friend, Emmy winner, Mike Renzi. Shawnn will be performing songs from her new CD release entitled, You Are There, well known songbook classics Autumn Leaves, How Deep Is The Ocean, The Shadow of Your Smile and more. Shawnn is a living memorial to an era that is almost fully behind us. Join us to experience the amazing jazz chanteuse extraordinaire, a veteran vocalist whose artistry is crafted in the mold of Sarah Vaughan, Carmen McRae and Nancy Wilson. All Ages.